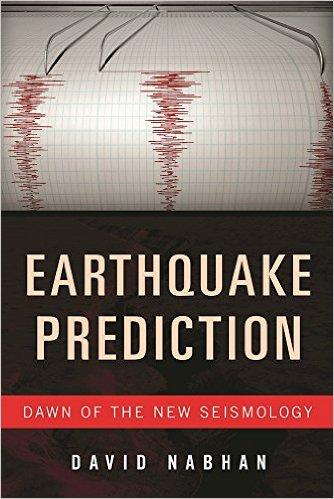 Millions of people on three continents, from London to Caracas, from Liverpool to Los Angeles, have heard the evidence in Earthquake Prediction: Dawn of the New Seismology— on television and radio, in newspapers and magazines.  It’s a supremely important message for the immense populations along the US and Canadian west coasts, and the Mississippi River Valley.

Skyhorse Publishing in New York, via their prestigious science imprint Arcade Publishing, is soon to release  a powerful work, unique in making public some very candid opinions of a cast of world-class scientists from a half-dozen nations who have previously refrained from speaking out regarding the threadbare "earthquake prediction is impossible" mantra that has somehow held sway for so long.  The reader will be quite stunned not only by who these individuals are but by the tone of what they have to say--including their  unsettling view of how politics may be part of the problem rather than the solution.

Yet, these seismologists and scientists are in good company, since Earthquake Prediction takes aim at antiquated as well as modern fallacies.  The all-encompassing view of the topic--beginning in the mists of past histories--puts to rest the mistaken idea that the great sages and naturalists of ancient civilizations never gave a thought to how, why, when and by what means their world should come tumbling down from time to time due to earthquakes.  To the contrary--Aristotle, Lucretius, Pausanius, Aelian, Thucydides, Pliny, the Elder, Seneca--many titans from humanity's intellectual hall of fame cracked their heads on this enigma in Greece and Rome, with not a few of them brushing ever so closely to what we realize now to be the scientific facts regarding seismicity...and accomplishing that feat two thousand years ago.  The thread of attempts to understand and predict earthquakes proceeds through the Middle Ages, is intertwined with the Black Death, is the focus of a great debate throughout the Age of Reason, with Voltaire, Immanuel Kant, Rousseau and other heavyweights wrestling with the conundrum--and more than a few of them hitting the nail squarely on the head, using nothing more than their intuition.  This, however, only sets the stage for the great eye-brow raising core of the work: a reasoned and sober refutation of the decades-long litany that has been repeated as if holy writ on the US West Coast and elsewhere regarding the supposed hopelessness of seismic forecasting.  Tens of millions of Americans have been somehow let to believe, for reasons never explained, that the same society which has catalogued the three billion base pairs of the entire human genome, the nation whose crafts are at this moment piercing the heliopause on their way into interstellar space, that a civilization that transplants organs with such mundane regularity as to be commonplace, somehow will never...ever...get a handle on its first steps toward a rudimentary method, at least, to predict seismic events with some degree of accuracy.  Such a pessimistic and unsupported view is plainly destined to be noted with so many other missteps in the history of science.  If the world doesn't spin, the continents don't drift, the atom can't be split, the Van Allen Belt doesn't exist, smallpox vaccines are useless, the sound barrier is unbreakable since man will never fly--then earthquake prediction is impossible as well.

The irrationality of that nay-saying vision is clearly displayed in Earthquake Prediction: Dawn of the New Seismology--and corroborated by some of the greatest physicists and seismologists on the planet, with thousands of researchers working in hundreds of the most prestigious institutions currently exploring at least a dozen disciplines and seismic precursors which may lead in the very near future to earthquake warning systems. Moreover, there are many seismically-active nations--China, Japan, Russia, etc.--who haven't the slightest idea what we Americans are talking about when the "impossibility" dogma is broached.  Westerners should be stunned to learn that China, for example, has been in the business of earthquake prediction for the last half-century already, devoting a bureau of its federal government to seismic forecasting.

More stunning still concerns the earthquake prediction taking place in front of millions of eyes, everywhere, and over the last few decades--concerning dams, hydraulic fracking, mining, etc.--and yet with the civil and scientific authorities somehow doing their best to have their cake and eat it too.  Earthquake prediction is used to ban fracking in New York, for instance, putting a great burden on residents of the Empire State, while still lingering in the domain of unicorns on the West Coast--where it could certainly be of some use.  And, most astonishing at all are the paths in the book which tread down the highly-secretive domain of human-induced seismicity.  Indeed, for while it's understandable that most prudent people at first glance would be quite reluctant to permit man-made earthquakes within the realm of plausibility, the irrefutable facts have already long since arrived.  As far back as seven decades ago, during World War II, only the Manhattan Project was more highly classified than "Project Seal," an undertaking to detonate four and a half million pounds of high explosives five miles off the coast of Japan to initiate an artificially created tsunami to wreak havoc along that island's coast--and only forestalled by events at Hiroshima and Nagasaki bringing an end to the conflict.  Japan isn't alone; Vietnam, Cuba and other nations have already been on the receiving end of punishing weather modification programs during wartime, i.e., cloud seeding, etc. Such weapons will be in the arsenal of the leading military powers on Earth in the near-future--if the plans and prototypes aren't already now.

Here then, is a work detailing how, why, when and where the next great telluric movement will take place--with great specificity--and what the tens of millions of residents  in the seismically active regions of the US and Canada should know about preparing for it.

And that is quite a sufficient attempt for any book; many works strive to accomplish far less.