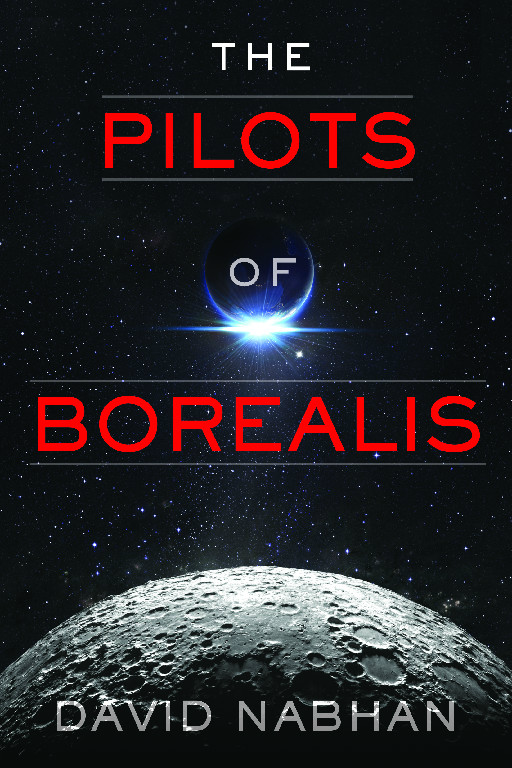 From Skyhorse Publishing and Talos Press
The Pilots of Borealis
Available to Order NOW! from Amazon (or below from B&N, Books-A-Million, Nook, Kindle, Audible.com)
Click "Look Inside" to read first ten pages free.

Library Journal:  "Verdict:  Told from the point of view of world-weary hero and killer Clinton Rittener, this debut novel is a throwback to classic space opera and should be suggested to fans of authors such as Ben Bova." (July, 2015)

See "Media Links" below for articles/interviews/reviews and more

"Top Gun" heads to outer space in this throwback to the classic science fiction of Asimov, Clarke, and Heinlein."--Edelweiss

Pump one tenth body weight in each fist for as long as the arms can stand it, pushing on wings the size of a pterodactyl's.  Do that under a pressurized dome at one atmosphere sea level, but subject to one sixth gravity on the Moon.  Now contend with a swarm of chiseled, fearless, superbly trained flyers, buffeting the air space around you like peregrine falcons.  This was the sport of piloting.  After helium-3, it was one of the first things that entered anyone's mind when Borealis was mentioned.

It was helium-3 that powered humanity’s far-flung civilization, feeding fusion reactors from the Alliances on Earth, to the Terran Ring, Mars, the Jovian colonies, and all the way out to even distant Titan. The supply, scooped up from the surface of the Moon, had once seemed limitless. That was a long time ago, though. Borealis, the glittering, fabulously rich city astride the lunar North Pole, had amassed centuries of unimaginable wealth harvesting it. She was the first to realize that those innocent days of ostensibly boundless supplies were now over.

The helium-3 was running out, and the energy crisis was real.

Even memories of the horrific and seemingly endless planet-wide devastation spawned by the four Petroleum Wars wasn't enough to counter this new unquenchable demand, triggering a ruthless contest.  Those powers determined to dominate the remaining supplies of He3 would discover through the indomitable spirit of an Earth-born, war-weary mercenary turned piloting enthusiast, that the most powerful force in the Solar System wasn’t mined on the lunar surface, but was instead found so much closer to home.

"Nabhan's impressive use of language and exposition takes the reader on a ride that explores mankind's social, political and economic differences, and in the face of imminent threat, arrives at a logical yet unexpected conclusion."--J. Dalton Jennings, author of Solomon's Arrow.

"A page turner that kept me on the edge of my seat from the first page to the last.  What an ending!"--David Pierre, author, Double Standard

"Captivating!  An intricately designed and superbly entertaining tale of intrigue, politics and well-written science.  If a few tears don't well up in your eyes as you read it, check your pulse."--Dr. Paul Burton, Publisher, Burton Digital Books

"Science writer David Nabhan ( Earthquake Prediction: Answers in Plain Sight, 2013, Forecasting the Catastrophe, 2010; Predicting the Next Great Quake, 1996) crafts the intelligent foundation on which an incredibly fast-moving, highly literate, and thoroughly unpredictable view of the future is built, one that is astounding, sublime, terrifying, and more than anything…plausible."   BISAC:  Fiction/Science Fiction/General

Order from Barnes and Noble (Paperback or Nook):  B&N

Order from Books-A-Million (Paperback or ebook):BAM

Church of England's official news font, "Church Times,"Christmas 2018 edition: "They make a desert and call it peace." RE: Calgacus & Scottish ex-pats on the asteroid Valerian-3.

My Bookish Ways  Excerpt & Giveaway Contest!  Win a copy of Pilots of Borealis